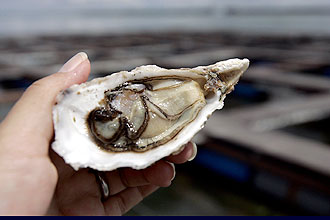 TOKYO (AFP) – Scientists in Japan have begun studying the “language” of oysters in an effort to find out what they are saying about their environment.

Researchers are monitoring the opening and closing of the molluscs in response to changes in seawater, such as reduced oxygen or red tide, a suffocating algal bloom, that can lead to mass die-offs.

Using a device they have nicknamed the “kai-lingual”, a play on the Japanese word “kai” or shellfish, scientists from Kagawa University want to see if they can decode oyster movements that might warn of possible problems.

The “kai-lingual” uses a series of sensors and magnets to send information on the opening and closing of shells in response to environmental changes.

The technique has never before been used on oysters farmed for food, but has been employed by pearl oyster farmers.

“With kai-lingual, we can hear the ‘screams’, like ‘we are in pain because of insufficient oxygen’,” said Tsuneo Honjo, director of the Seto Inland Sea Regional Research Center at the university.

Pearl oysters have been placed among their food-farmed cousins where they have acted as “interpreters”, alerting growers to ocean changes, he said.

“We have firmly established conversations with pearl oysters through years of research. They should translate into the reactions of the farmed oysters for us in this project,” he said.

The research started in October and will last until the harvest in March, Honjo said.

“So far, oysters are talking in a healthy fashion,” he said.