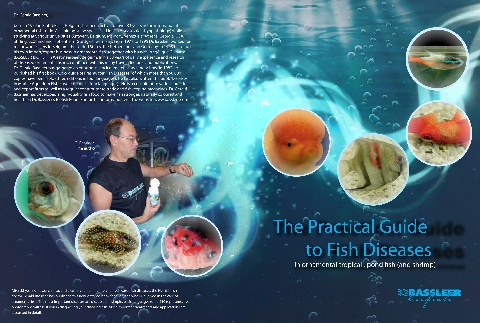 The photographs are selected from a selection of over 12,000 photographs, all taken through the eyes of a fish doctor, the most representative ones have been bundled, resulting in this highly practice oriented book. The illustration of the sick fish speak for themselves and guide the reader through the difficult and rather complex subject matter of fish diseases. However, not all but only the major fish diseases have been described. For example: detailed information is presented on the very common Columnaris Disease, KHV, False Neon Disease, False Fungal Infection, Hole-in-the-Head Disease, Discus and Angel fish Disease, Diseases of Shrimp and many others.

Scientific and difficult text has been avoided as this book “The Practical Guide to Fish Diseases’ is meant for everyone who is involved in the care of ornamental fish.

The first chapter of the book informs about Caused of Fish Diseases: we must ask ourselves question why the fish are becoming sick= looking for the reasons! Through our experience we have learned that most disease come from stress and that more than 50% of the problems comes from bad water quality!

The second chapter gives you a summary of the most important signs(symptoms) of diseased fish with very clear colour photographs.

The third chapter presents detailed information on the most important viral, fungal, bacterial and parasitic infections with descriptions, clinical presentations and recommended actions and/or treatments.

The last part gives a detailed overview of all possible medications, with pure ingredients and practical applications.

The author:
Dr. Bassleer (°1954, Ichthyopathologist) is specialised in ornamental fish diseases and collected an enormous amount of material and know-how during his work (trade & training) in the fish industry.
In 1982, his first book “Colorguide to Freshwater Fish diseases’ was published and more than 50,000 copies (3 editions in 4 languages) have been sold. In 1991 he has published his book “The Diseases in Marine Aquarium Fish”. In 1996 he published his “The Illustrated Guide to Fish Diseases in ornamental tropical and pond fish”. This large book which contains 1000 colour photographs (and Analytic Computer Program) has been sold all over the world in 6 languages (including Chinese and Russian). Since 1995, Gerald Bassleer is director of Bassleer Biofish (Belgium) and since 2006 OFI-President.

Dr. Gerald Bassleer
born in 1954 in Sint Niklaas, Belgium, has been active for over 33 years in the international ornamental fish trade. As a biologist, he specialised in fish diseases (ichthyopathology) while studying at various universities: Antwerp, Belgium; Maracay, Venezuela; Athens, Georgia, USA; Stirling, Scotland and Höhenheim, Stuttgart, Germany. From 1977 to 1995 Dr. Bassleer worked for major wholesalers in Belgium, the United States, the Netherlands and Germany. In 1995 he set up his own import/export business in ornamental fish, together with his wife, Angélique Gillhaus: BASSLEER BIOFISH in Westmeerbeek/Belgium. In his 33 years of daily experience and research of diseased ornamental fishes, combined with his many travels, lectures and publications, Dr. Gerald Bassleer has gathered an enormous stock of material and know-how.

In 1982 he published his first book ‘Colorguide of Freshwater Fish Diseases’, of which more than 50,000 copies have been sold (three editions in four languages). He has also written the book ‘Diseases in Marine Aquarium Fish’ (two editions in four languages). He is a consultant to various breeders and export firms as well as a regular contributor to trade and fishkeeping magazines. Dr. Gerald Bassleer has developed a high-quality fish food to make fish stronger, naturally coloured and healthier: Dr. Bassleer’s Biofish Food.

1 Trackback or Pingback for this entry